Posts from the ‘Ornament’ Category 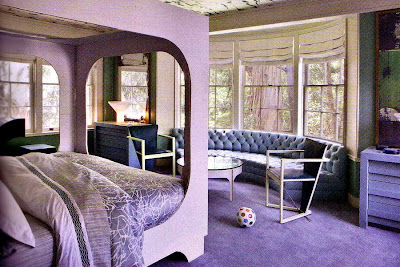 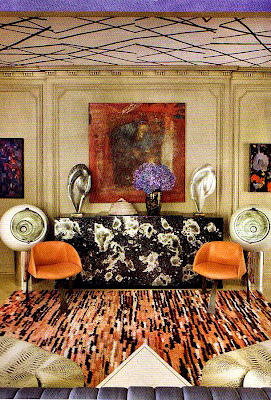 -Vogue Living Australia Nov/Dec.
I take notes because I yearn for beauty, for continuity and for a narrative rich of depth and substance in a land of lessor notions. Here in L.A. we certainly need to do a better job in distinguishing the artist from the art, the writer from the writing, the actor from the act. But I like a lot of people like to keep them entwined.
Kelly Wearstler, I hear, is a very nice person. A friend commented on her appearance as a judge on a television show as “She had some smart things to say, but was a little too confident for me to like her.” That is perhaps what one’s marketing department might or might not call being a visionary. Design is most always taking from the past and putting one’s stamp on it and not asking questions. As Lady Mendl was fond of embroidering, “Never Complain; Never Explain.

To my own tastes I like Ms. Wearstler’s bright white compact building on La Cienega because in the evening the windows of her studio glow— chandeliers like a chimera in my brain–in a flight of fancy. And because on the other side of her building, from my rooftop deck, I can see the lattice fencing on her building’s roof and imagine that’s where her chaise lounges lie.

She is that heroine in our American Story of success that we love in LA: good timing, smart alliances, hard work and get it done. No nonsense. This particular story tends toward a future of luxury and glamor. Age never creeps in, because the shoe is already on the foot. The past is a sentence in a biography that ends with a point to the future: “She currently resides in Beverly Hills, California.”

You may want to take notes. This is the story of the self made. You are not who you are or where you come from; you are where you want to go. Your interior can and will evoke your future. A Brand is a Brand is a Brand. Ms. Stein might have said if she were alive and had taken notes.

Ms Wearstler like all of us here in Los Angeles can become sacrifice to a deity larger than ourselves. Los Angeles is the place to come to remake oneself. It is the mythic move west. This is the story of our parentage; it is one of the stories of America. But it can also be the story of a future that lacks the congruency of the past. Cintamani is an Ottoman motif. The meaning of the motif is not certain. The word itself means jewel; perhaps it represents the third eye, evolving the point of one’s self-actualization.
This cardboard gilt frame was inspired by the cintamani motif which I developed inside of the larger context of Oracle. The Oracle has long fascinated me and it’s study presents the question, “Where is the Oracle of the 21st century?” Alas, there are no prophesies for the greater good these days. I would suggest:
1. We do not have a developed understanding for the need of ritual
2. If there were a true oracle, they would stay quiet.
Then there was the mirror. Our reflection seemed an appropriate arena for exploration inside of Oracle. You are the oracle. And, if you choose no, you may just sit and gaze and ask “Who is the fairest?”
Encyclopedia Mythica will expand: “In ancient Greece, the oracle was a place where these divinely-inspired prophesies of the future were passed down to mortals…To be an oracle, the place needed to have a variable and periodic attribute that could be subject to the interpretation of the priesthood. The priests would then ascribe both the event and the interpretation of the event to their patron god or goddess…the ancient oracles of Zeus were areas where priests could interpret the wind rustling through the trees…The most famous oracle was that of Apollo at Delphi, discovered as a fissure in the side of Mt. Parnassus emitting a gas that would cause seizures among the goats that grazed nearby…The Pythia was the priestess of this oracle who was crowned in laurel and seated on a tripod perched over the cleft that produced the intoxicating vapors. Her utterances while under the influence were usually so disjointed that additional clergy were needed to provide interpretation.”